He Did It Himself 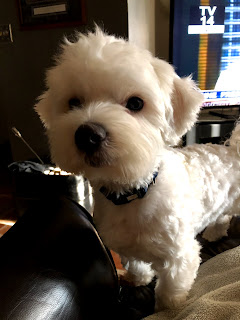 Several years ago we lost our precious little Bailey.  He died on the 13th of February, and by February 21st this little guy found us.  Marley Delano Perry.......
Bailey was a West Highland Terrier, and Marley is a Maltese...so they should not have any of the same characteristics.  And the fact that Marley did not "know" Bailey, he didn't pick up any of Bailey's traits.
Marley seems to be getting a "signal" from someone, because he does have many of Bailey's characteristics.  One of them is he barks like he's a Rottweiler, only when one of us is with him. Bailey adored my husband, and Marley is worse.  I was in the living room one day and I heard the most awful sound....it kinda sounded like a beagle??? You know how they howl? I walked into my office, and there was "little Marley perched on the back of the loveseat looking out the window."  Howling!  When he loses site of my husband, he whines, cries, and runs from one door to the next.  And just last week, "learned" to howl!
Another of Bailey's characteristics was fear.  Only of loud noises, like the crack of thunder, and the flash of lightening.  He hated the mail truck, and fireworks.  My daughter suggested a "thunder-shirt", and I think she sent it to me.  Bailey would not let either of us comfort him.  It truly broke my heart to watch him shake because of the storm.  The thunder-shirt worked only if I put it on him before the storm started.
Unfortunately, Marley does the same thing.  The major difference is Marley will let us hold him, and he stops shaking.  I bought a new one for Marley because he weighs a lot less than Bailey did.
My husband and I are idiots when it comes to our fur babies. Last week I had an appointment, and left before the storm came.
I was in my car, driving home when my husband called me.  He said, "are you ok?  We are having a really bad storm?"  I assured him I was fine and would be home soon.  Then my husband said, "Did you put Marley's shirt on him before you left?"  No honey, he put it on himself...
Posted by Kathryn Neff Perry at 1:55 PM

Years ago we had two small dogs who would both crawl under our sofa during storms. The opening wasn't very large, and so they'd lay as flat as they could and drag themselves underneath. It's heartbreaking to watch. Neither of them could be consoled. I still think of them when there's lightning. Thanks for sharing, Katt. And congratulations on your new job. You are my hero!

Thanks Joy! I really miss you.
I know, when they won't let you comfort them, its so sad. I'm happy that Marley is ok, if he's on my lap!
Take care my sweet friend,
No...You're my hero!!!!
Hugs,
Katt