It Will Grow Back 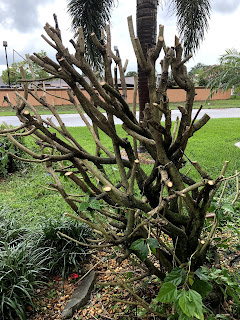 We have been blessed for many years to have a dependable guy cut the grass, and trim all the bushes.  Unfortunately he was in an auto accident about a month ago, and will not be able to do all that he has in the past, at least for a while.  I tell him all the time, this hibiscus bush does better when he cuts it back.  He never argued with me, but he never cut it all the way back. I don't think he believed me when I told him you have to cut out the "dead wood." I think he has always been afraid to do that.  So in his absence, I have taken over that role of "bushes trimmer."  This particular bush started out as a potted plant.  It is beautiful because it has "double flowers on it."  As you can see, there's not much left of this poor little bush.

Wiping the sweat from my face, I stood back and looked at this now pathetic little tree. And realized the similarities. Lately, it feels like the Lord has been pruning my "branches".  When I don't take the time to sit in the morning, and get all the "sonshine" from my devotions, and Bible, my "flowers" are only on the outside.  Not much on the inside.  My heart and soul become weak and spindly.

I think writing this blog had a two-fold message.  The other one is maybe Jack will see what I did to "his" hibiscus, before he comes back.  I wanted to break it to him slowly.  I only meant to trim that bush.

It will grow back, hopefully before he sees it!
Posted by Kathryn Neff Perry at 1:46 PM